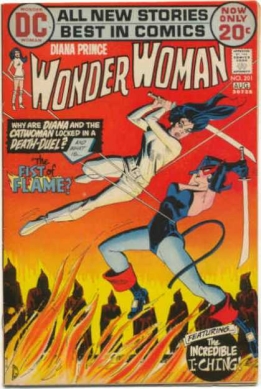 Digital comics; what’s not to love? The colors are beautiful, the price (usually) can’t be beat, you can shove a stack of mid-’80s Justice League Internationals weightlessly into your tablet and bring them with you on the bus, and you can re-download everything later when you lose your tablet on that bus. But what’s up with guided view?

Reading a comic in guided view is like watching a flip book; each panel is essentially cut out of the page and pasted into its own page of a scrapbook. One has the option of ordering the “camera” to pull back at the end of a page so the entire thing can be viewed as it was meant to before jumping back in to the out-of-context single panel reading. Comixology’s version of the trick is particularly advanced (and apparently trademarked), occasionally allowing the panel to pan left or right so as to read multiple actions in a single panel in the proper order. I sometimes double-click into guided view because it makes a perfectly sized zoom for me when I want to inspect a Geof Darrow background for a couple hours. Otherwise, it renders pointless all the hard work that went in to designing the comic book page.

END_OF_DOCUMENT_TOKEN_TO_BE_REPLACED

When I first started lettering I made the wise decision to avidly study what other letterers do and never stop. One of the first things I noticed is that letterers make stuff up all the time. Things that certain letterers find helpful become rules and often those rules become widely accepted in a kind of natural selection process as the art form evolves. I love this. When my early collaborators would ask me why I insisted on shoving as many balloons up to the top of the panel as I could I would simply say, “Because Richard Starkings says you have to,” and that would be good enough for both parties. One of my own unilateral decisions early on was that, since most people aren’t “trained” to read comics, I should always endeavor to make sure that consecutive balloons are geographically close to each other.

Now, this may be controversial (I admit I’ve never taken a poll) but I remember reading a post from Eddie Campbell somewhere along the way confirming my suspicion that people need more help following along with comics than we think they do (and the philosophies of Mr. Campbell, along with Mr. Starkings, should be adhered to, at least in my shop). People don’t naturally think, “Hmm, I’m at the end of the balloon. Maybe I should search for the next invisible ‘row’ of this panel, start at the left, and continue reading.” They will instead look for the next available block of text, the same way we all do when reading a magazine or looking at a wordy advertisement.

Lettering in this fashion means the page has to be designed as a single unit rather than a collection of individually designed panels. Artists already know this innately — most veteran comic book artists (especially Jim Steranko) will say that images in a panel must subtly lead the eye to the next panel. Letterers aren’t as keen to do this, mainly because we often have a massive challenge of fitting words and art together without deleting or changing anything within an almost impossible deadline, another 22-page job waiting right behind it. When facing a tough, wordy page, often the best a letterer can do is try to fit the words rather than design them. But when it works in our favor, when the art is already working for the story rather than against it, we can actually try to help the reader out a little.